The fast moving cloud cover closed over us mid-morning, and by the time we had gotten ourselves and the boys and their bag ready to head out to run errands—a forty-five minute process–rain started to fall. But as a woman who ran one of the crèches (daycares) put it, “It’s Ireland. You can’t let the rain stop you from going outside.”  We ripped tags off our new rain jackets and pulled out the stroller’s rain cover and ventured out into the gray day.

We were meeting friends for dinner in Ranelagh later in the evening and by the time we left the house it was past three, so we planned on heading directly to dinner, however wind-lashed and damp we might look. We walked up through Ranelagh Village, where I spotted a little soccer ball almost exactly like the one we had in the window of Serendipity. We had a twenty minute walk ahead of us and we didn’t want to stop, but I made the mistake of saying “ball” aloud, or perhaps C. spied it himself anyway. As we continued up towards the Triangle, a busy intersection, C. was furious with us and kicked at the rain cover and kept hollering about the ball.

The original plan was to go to the newly refurbished library in Rathmines and then head down to a mall where there was a Dunnes, which is a Target-esque store that has housewares and groceries. C.’s little fit required us to alter our plan and head directly to Dunnes to find him a ball. Once at the shopping centre, we split up to try and get our missions accomplished. Luckily, there were Bob the Builder  and Barney train coin-operated rides that kept them occupied for a bit, but our fatal error was removing the boys from the stroller. Once they had a taste of freedom, they did not want to go back. Sascha bravely made his way to a nearby toy store while my mom and I searched for endlessly fascinating things like cutlery dividers. In the toy store, Sascha did his best but while trying to remove C. from scaling a seven foot display of heinous Disney balls (two of which we now own), G. proceeded to knock over a bin full of tennis balls, sending about forty rolling all over the store.

After we headed over to the vast expanse of the main store, I missed our free truck-like shopping carts at Target that would easily snap in two kids, though they required a wide turning radius. Not only would we have to pay for shopping carts at Dunnes, but they would not hold our two children. So I ended up piling our purchases in the empty seats of our stroller, which was already piled with our cast-off layers of clothing. Disoriented in a new market, and feeling the tug of jet lag in the brightly lit and busy store, I circled what seemed like the same aisles looking for things. I’m sure I probably looked like a nutty homeless woman muttering to herself (“Where are the sweet potatoes?) while pushing around most of my belongings. In my attempt to speed things up, I decided to do the self-checkout. I have no idea why I did this, since I have never, ever, opted to do this in the States.  I did not have many items, so how bad could it be? Well, I followed the directions as best as I could until I got to the damn sweet potatoes. Only one was marked with a bar code, and I had two. I couldn’t recall if the price was by weight, and had no idea what to do with the second potato. My seconds-long confusion prompted an angry message on screen about detecting an unscanned item on the scale. I could feel the queue behind me shift impatiently, my cheeks reddening. I was baffled. For a second I actually thought G. trying to balance on the counter was the detected unscanned item. Where was the back button? The machine starting beeping and a light was flashing and I expected the Garda to come for me at any moment, but luckily it was just a cashier with a key who had to show the stupid American how to work the machine.

We met up with C. and Sascha again, Sascha having combed the blocks outside of the mall to find us a coffee maker and a larger trash bin. That is so Sascha. He persists and does not let us down.

Our friend Ciaran was going to meet us by the mall entrance to fetch all our items in his car, because there were too many to walk with. By this time, C. stunk and I set off in search of the restrooms. I circled the mall frantically trying to follow the arrows indicating where the restrooms were. I headed toward one sign only to find myself in a hallway with nothing but an elevator, only to look back at the signs, which now seemed to point in the opposite direction. C. grew more fetid by the minute and wanted to go “upup,” and don’t you know it, he was right. Classic expat mistake: Level 1 is not the ground floor in Ireland. They call that ground zero and the level above is level 1. Diaper business done, we walked over to Ciaran’s to meet his delightful children and wife.

Ciaran is the only person I have ever met who was featured on a national stamp, most people being dead before they wind up on zinging back and forth through the post. What an amazing honor and testament to his legendary music. We are so grateful for all his help.

The boys were completely out when we arrived, and were shy at first with Ciaran’s sons, 8, 5, and 3. I heard Ciaran’s youngest whisper to his brother, “Which one do you like best?” And his brother said, “ I like them both.” “Me too,” the youngest replied, who had dressed for dinner in a shirt, tie, and fedora. I wanted to eat him, he was so cute. C. & G. really warmed up at the restaurant though, and the five boys soon became fast friends. Good wine and good company revived us all. C. especially suddenly seemed to think he was five years old, the way he was laughing and carrying on with the boys. Ciaran’s kids wanted to know if we were all going to go out to dinner again together the next night. These aren’t the greatest photos–not sure I love the iPhone with the flash, since I can’t correct the “white eye” very well, but you get a sense of this band of merry little men: 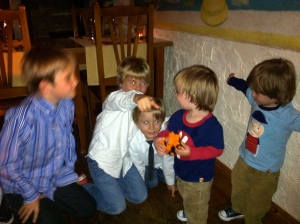 We’ve been having so much fun it’s hard to believe that Sascha is actually going to have to go work. (They’ve granted him a few days “settling” reprieve.) A few fumbles, but we are making our way. We are using an iPhone to do a wireless connection since it will be some weeks before we get internet or house phone, with some fear as to what our cell phone bill is going to look like. The wind is whipping all around the house tonight and rain is falling again (on the clothes I just put out on the clotheline) and I think it’s causing some connection troubles so not sure if I’ll be able to get this out tonight or tomorrow. It is now 2:30am so I am not doing myself any favors toward acclimating, but if I can sleep sooner than 3am that will be an improvement. I fear in part my late-night blogging is a bad habit but am not sure what other time I will have right now to myself.  At least the boys have been quiet but we did get back from dinner quite late.