Yesterday we went to Phoenix Park, the largest park in Europe, to visit the Dublin Zoo. As always, for the boys it was almost as much about the journey (riding on the bus) as it was the destination. Though the bus is a struggle to get on quickly with the stroller, once on, it is rather lovely to get to hold the boys and press my cheek against their cool ones as we wind our way through the city and point out what we see. From the bus rides alone, G now knows the color “Geen!” as he calls it, because of his impatience when we have to stop at a light. He also like to say “Man!” and point right at some poor fellow getting on or off, having recently discovered, when you ask him, that he’s a “Boy!” Everything is quite exclamatory.

An "ay-fant" as the boys would say. Most of these photos are by Sascha

Though I was excited to have the boys see all the animals they have read about in books, I am always somewhat sad about the concept of zoos in general. Dublin Zoo does its best, as most modern zoos do, to give the animals a semblance of a natural habitat, but what is life like, being a spectacle? The lion in particular broke my heart. She seemed lonely, looking for something, or perhaps even unwell, leaving her den and meandering along behind high fences mostly covered by trees and bushes to a glass viewing area. Her roar was not the iconic rise-and-fall of the Paramount Pictures lion, but a plaintive, single, insistent note—a plead. 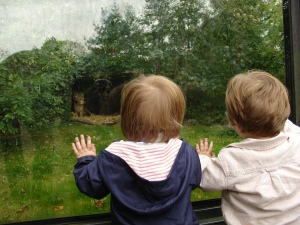 Who is observing whom?

The zoo is very well laid out. All along you find mini-playscapes for children to burn off energy.

A toddler in his natural habitat

But the overcast morning became a full-on rain about 1.5 hours into our journey. So on the “African plains,” we huddled with other families under a small shelter crowded with buggies and fogged-up rain covers across from the “savannah” where the giraffes, ostriches, and zebras roam. They do their best, as do we, to make their home in the Dublin damp.

The last time we were at a zoo was an April day in Los Angeles, a little over a year and a half ago. We were trying to get out of our own cages of sleeplessness and new parenthood and moving anxiety, so we drove down from our house in the hills on a boulevard as wide as the sea and full of traffic. The sun was so hot and blinding it might as well have been August, and I remember we mostly wore the boys in carriers and they were nearly armored against the sun, with hats and muslin wraps. We paused by the giraffes there, thinking the graphic spots might grab their attention. Looking back, I doubt they saw much.

This time was quite different. When we arrived home, the boys were achatter with new words (“Yion!” “Zee-ba!”– all from the “Sue!”; also, regrettably, “I-KEA!“, which they kind of sing-song), and it is fascinating to watch their understanding concretize from the world they see in books or in Baby Einstein videos.

The boys were awestricken by the majesty of the animals–in one instance a tiger paced seemingly inches from them but untouchable through the glass–but they have no idea how far from home they are.

Untitled from Other Side of the Road on Vimeo.