Is it too late to recount our Christmas in Dublin? It’s halfway through January already and I think I’m only now nearly-recovered from the sicknesses that plagued us into the holidays.

I do not have cute pictures from the boys’ carol sing. I should have seen it coming, the high expectations and the inevitable fall. G had been spontaneously singing “Jingle Bells” all week. If I sang “Rudolph the Red-nosed Reindeer” and left out key words, C would fill them in. So what if they thought you dashed through the snow in a “Norse-pen play”?

At the creche holiday party, the lights were dimmed and the kids were to stroll in carrying “lanterns.” Only before this could happen, our boys broke rank, crying “Mommy! Daddy!” and we had to pull them out. They wouldn’t wear the Christmas tree hats. They were very bah-humbug. So there we sat on the tiny classroom chairs, with them clutching us, and back into the pockets went the cameras. Apparently in public, G & C are wallflowers.

As the final countdown toward Christmas began, I could feel myself getting sicker and sicker. (So you out there who is searching for the Dublin stomach bug 2012 and arriving at my blog, read on!) 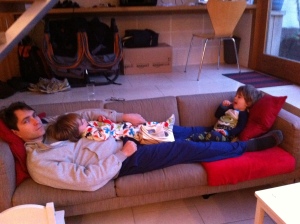 Note the box of tissues and the red blanket covering one of the cushions, where we had to remove a cover that had been vomited on

I almost didn’t think we’d make Christmas — not that it wouldn’t come, because it always does, but that we’d be too ill to acknowledge it in any real way. On Christmas Eve, S was the color of Silly Putty and unable to touch his food. Earlier in the day, G had vomited, which I had attributed to the antibiotics he was taking for the ear infection after his month-long cold. I have been feeling a cold virus replicating into my bronchial cavities for days.

Sascha’s cousin from South Philly, whom we just call Aunt Giovanna, arrived into our den of sickness to spend Christmas with us before going on to Milan. Despite the transatlantic flight and the time change, she looks glamorous and well-rested, in sharp contrast to us in our various stages of viral takeover. She is bearing loads of fruit and gifts for the boys. G falls in love instantly with “Joe-Bonna.” 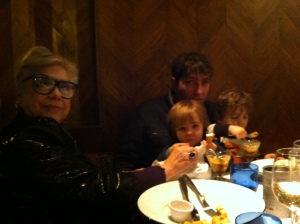 Giovanna spent many years working for Luciano Pavarotti, and I think this anecdote illustrates her wonderful personality. Apparently, Pavarotti was so distraught at the end of one affair that he threatened to kill himself, phoning his manager to say he would throw himself out the window. His manager, frantic, got in touch with Giovanna. Obviously accustomed to histrionics, she responded, How could he fit? He’s too fat to fit through a window.

Giovanna is an original.

We had plans to spend Christmas day with Ciaran and Siobhan and family. They told us to come despite risking contagion, dismissing whatever we might have as something they surely already had. On Christmas morning, I have no real voice but I think I am getting better and I manage to make two pies. Pumpkin: 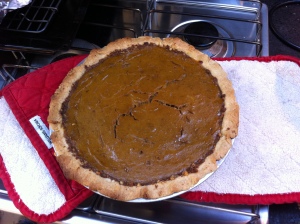 And this sea-salt caramel apple pie, which was a huge hit and well-worth making again. 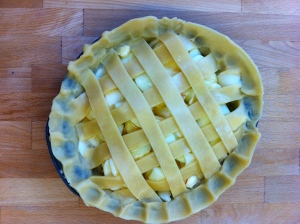 This pie helped me get my pie confidence back 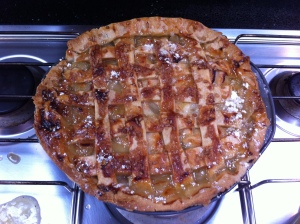 Ciaran had cooked such an amazing meal and we were so lucky to have such a warm Christmas celebration together.

We toasted to good health, and really, really meant it. 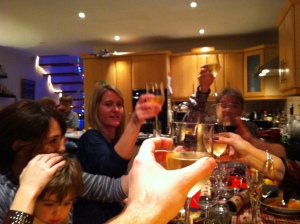