I have been driving since I was about 13 or 14. My mother saw no great harm in my brothers and me getting behind the wheel when we were a few blocks from home. After all, my dad had a ride-on mower that we would steer while sitting on his lap when we were young; in beach towns we’d ride bumper cars and go–karts in between eating fried dough and ice cream. So after gymnastics practice, she would pull over and let me drive the blue Bonneville home.

She didn’t know that one of our favorite suburban pastimes would be sneaking out of the house and taking the cars. We had nowhere to go, really. It was the kind of town where the lights usually started blinking at 10pm. But driving on the empty streets and blasting the radio, we just reveled in our freedom.

I passed my driving test on the first try. Driving school was not mandatory at the time, so I never had any formal lessons, beyond my mother and my brothers, who would blow off noontime Mass to let me practice in parking lots. I did fail miserably in my efforts to learn stick shift, which I chalk up to a father-daughter clash. My father had no patience to teach me, and I gave up too quickly.

I owned exactly one car, when I was a junior in college. It was a Dodge Shadow in the strangest shade of blue you’ve ever seen. My friends dubbed it the Teal Mobile. When I moved to Japan, all that I kept of my belongings was what fit in the car.

Sascha is a borough-bred, meaning Manhattan born and raised. He got his license when he was twenty-two, after college in CT, where he wouldn’t have to parallel park. The years we lived in NYC we had no car. When we first moved back to L.A., we had a series of rented company cars. I remember feeling absolutely adrift on the massive span of the 405: five lanes in each direction, an endless swarm of headlights. I had once negotiated the freeways and exchanges effortlessly– the 10 to the 110 to the 5 or the 405 to the 10 to PCH or the 5 to the 134 to the 101, but in the time I was away from California, I had forgotten them and crucial shortcuts. My friend V., who has a special passion and talent for L.A. routes, was extremely disappointed in me.

When the boys were coming, (and the job was ending). Sascha and I knew we’d have to buy a car in California to ferry around our new family. We agonized over what car to buy for months, going on test-drives, with me waddling across lots and into showrooms to use the bathroom. It was actually one of our first big parental decisions, and because we thought we were too cool for a minivan (we just couldn’t do it as our first car purchase), we narrowed it down to SUVs. (Go on, judge us. We did at least buy a hybrid.) We consulted Consumer Reports endlessly. This is the thing responsible people seemed to do. The type of people who are becoming parents. I realize more and more how insane modern parenting is. We are so fearful, so anxious (even though we think we aren’t), and people make a big profit off selling us the illusion that we have some control.

When we left CA, we shipped the car we bought to CT. In our limbo year there, we careened around the state to every fair we could find on the weekends; during naptimes or bedtimes we’d drive the dark stretches of narrow parkways between CT and NYC to visit friends in the city and let the boys run through the sprinklers at the American Museum of Natural History.

Here we hoped we’d be able to forgo a car. Sascha bikes to work and everything essential is within walking distance of our cottage, though the gale-force winds, rain, and early darkness make walking with the stroller less enjoyable. The trouble is in seeing the country. We don’t know if we have a year here or many, and getting on the trains or the buses with the double stroller and luggage is extremely difficult. (Buses, for example, won’t take you on if there is already a buggy/stroller on board.) The biggest problem, though, is that the public transport system doesn’t link up, which is disappointing for a European capital. The LUAS, or light rail, near us, for example, doesn’t connect to the DART line, which runs along the coast. So three months in, we caved when a car came to us from a friend of friends who were repatriating to the States. 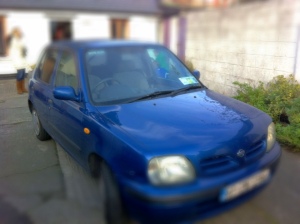 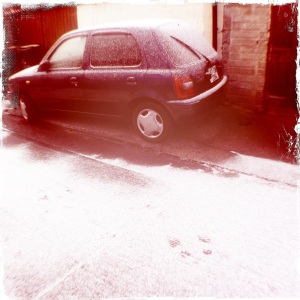 It looks like the Matchboxes my younger brother used to play with. It is so tiny I’m nearly positive that it would fit in our American SUV if we folded down the back seats. But by some miracle, the double stroller fits perfectly in the hatchback boot, as well as our car seats. You may recall that our lane poses some challenges: 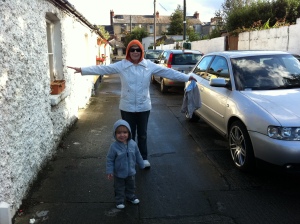 So finding this car, which actually maneuvers down the lane without scraping the houses and fits the four of us plus stroller, and is automatic, was kind of miraculous.

We each took a driving lesson. We almost didn’t, and just rented a car for some post-holiday exploring, but again, now that we are parents, we are more cautious. Like we should, for example, make sure we actually feel comfortable driving on the left side of the road before we strap in our sons. Welcome to the Age of Overparenting, indeed.

I was a confident driver in the U.S., but here my long-honed habits, now second-nature to me, are useless, even potentially dangerous. I must train myself to let my eyes drift up and left to the rearview. I must reverse with my head turned over my left shoulder instead of my right; stop my right hand from reaching for the gears. The signals are on the right side, so we set off the wipers almost every time we try to indicate a turn.

I should tell you I’m a terrible back-seat (passenger seat) driver. I slam on imaginary brakes; wince at cars coming too close. I don’t like being in a car unless I’m driving. So it was comical to be in a driving school car, where the instructor has his own set of brakes, and the car has a sandwich board up top and all around the doors announcing the driving school. I kept getting annoyed when he would press the brakes as we were approaching other cars. Then again, I’m glad he was there because Dublin has a shocking lack of helpful things like, say, lane markings. And bus lanes: you are in a bus lane, now you’re not, oh wait it’s a bus lane again, and you can’t be in it except maybe sometimes on Sundays or late at night. As people have told us, once you are outside of the city, on the large national roadways, it’s much easier. But within the city, at least at first, it feels much more stressful. I was fairly certain, for example, that a big street right near us was one-way. That’s how narrow it is. Sascha’s tip was to drive in the middle like it is one-way and move only if another car is oncoming. That helps a lot with holding my breath for fear I am going to sideswipe all the parked cars to the left of me.

We are ready to do some exploring of this fine little country we are lucky enough to be living in. 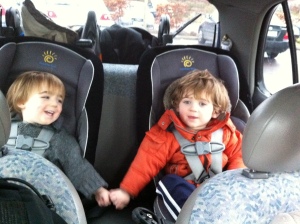 Stay tuned for our journeys on the road.

12 thoughts on “Driving on the other side of the road”